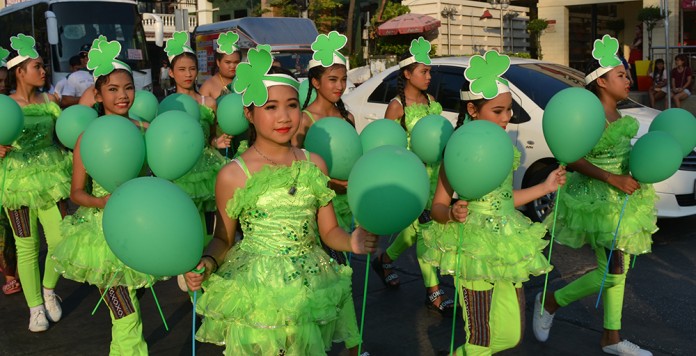 Happy St. Patricks Day! Tomorrow, from 3:30PM for several hours Beach Road will be closed to all traffic as it shuts down and prepares for the cities yearly parade full of Irish cheer, marching bands, floats and costumed characters.

St. Patrick is the patron saint of Ireland, and his feast day is celebrated around the world. Celebrations will be taking place in cities from New York to New Zealand, Beijing to Dubai and from Moscow to Sydney. In towns and villages throughout Ireland people will be celebrating, and of course, here in Pattaya, the St. Patrick’s Day Parade continues to get bigger each year.

The annual parade, which is organized jointly by City Hall, the Irish Society of Pattaya and the Father Ray Foundation, is delighted that once again His Excellency Mr. Brendan Rogers, Ambassador at the Embassy of Ireland in Bangkok will be in town to lead the parade.

The festivities to celebrate St. Patrick’s Day will start at Alcazar Theater at 15:00 with the raising of the flags and the singing of the national anthems of Thailand and Ireland.

The Parade will start at 15:45 and proceed from Alcazar Theater down soi 4, then along Beach Road, turning left on South Pattaya Road and ending on the grounds of Pattaya School No. 8.

There will be several marching bands, including the musicians from the Royal Thai Navy. A cast of thousands, young and old, Thai and foreign will march along Beach Road and be joined by many decorated floats.

You don’t have to be Irish to celebrate St. Patrick’s Day; on the 17th of March everyone is Irish, just remember to wear something green.