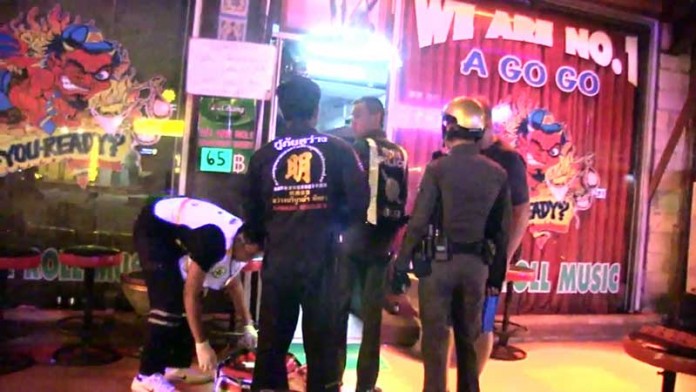 A Czech Republic tourist was left with bloody wounds to both cheeks after an incident at the We are No 1 A Go Go bar on Pratumknak Road near Jomtien just 100 meters from a police sub station.

Manager Anuwat Bunkert, 39, said that four tourists were drinking and when it came to closing time they refused to pay the 1,380 bill. He stated that they had no reason for not paying the bill, simply said they did not enjoy their experience and did not want to pay.

At this point they stated the staff attempted to stop the tourists from leaving and sent a staff member to the police sub station to get police to assist with the situation.

However, Khun Bunkert states then that Mr. Negas attacked a staff member blocking the exit in an attempt to escape before the police arrived and the staff member then defended himself by hitting Mr. Negas with an ashtray. Then a melee ensued as the other staff, in their words, defended the employee that was attacked. The other tourists with Mr. Negas were heavily intoxicated but stated that the bill was Mr. Negas responsibility and they were not officially involved nor did they participate in the brawl.

The victim was taken to Pattaya Memorial for stitches. He was unable to answer many questions from the police and was stated as being very, very rude as well as heavily under the influence of liquor and according to  witnesses could barely talk and walk.

Pattaya Police told the press they would wait until he was out of hospital and sober before getting to the bottom of what really happened. It is unclear if the bill was settled or who will be responsible for Mr. Negas hospital bills. They will also inspect CCTV to see who struck first.

The day after the attack, however, the gogo remains closed with a temporary closure notice on the door. The gogo is one of Pattaya’s oldest and the only surviving gogo in Jomtien.