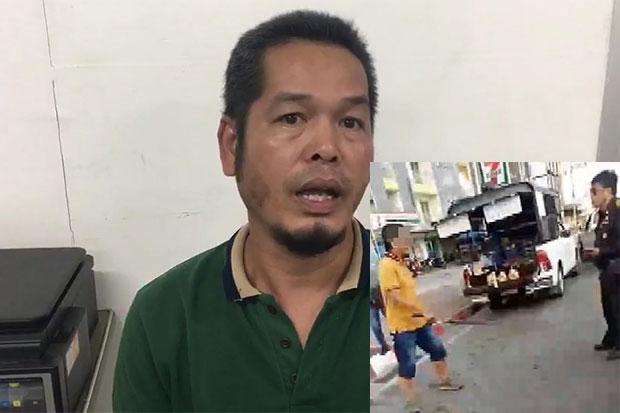 Mango Seller Thanyaban Chomchot, 43, defied arrest on Tuesday the 6th when a city official, Mr. Kwanchai Klaisombun, 37, who is a public inspector for City hall, approached him under the cities public cleanliness law and for selling fruit off the back of his truck, which is not legal.

Mr. Chomchat proceeded to pull out a foot long Japanese style samurai sword and threaten Mr. Klaisombun who decided to back off. Mr. Chomchat then proceeded to leave the scene with his wife who was riding in the back of the pickup truck.

The incident was recorded by a passerby and the incident went viral on social media as police officers worked to identify Mr. Chomchot. Mr. Klaisombun stated on his twitter account that he was shaken by the incident and the public often did not understand how dangerous their job could potentially be. He also stated he was just doing his job by attempting to detain and arrest the mango seller.

Today, Thursday the 8th, Mr. Chomchat voluntarily turned himself in at Soi 9 to the Pattaya Police as the incident has now racked up two million views on Twitter and Police Lt. Col Somphan Suksamran had identified the man and had called him and encouraged him to turn himself in voluntarily versus the police arresting him.

Mr. Chomchat stated to the police that (Despite the video and photos clearly showing a price and for sale sign in the back of the pickup) that he had not intended to sell the mangos and had merely stopped to buy items for his wife at a 7-11 on his way home. He stated a person approached him and although (his words) he did not want to break the law he decided to sell them a mango. The inspector saw this and approached him and the incident escalated from this point.

Mr. Chomchat stated that he became angry as Mr. Klaisombun’s partner had taken his scales, which he claimed were for personal use and not for sales, without his permission and he considered that as theft. He then admitted that is when he lost his temper and brandished his sword.

Police pressed three counts against him – carrying a weapon in a public area, resisting arrest, and violating the Public Cleanliness and Public Order Act regarding the use of a pickup truck or other vehicle.
He is at this time being held without bail awaiting trial.