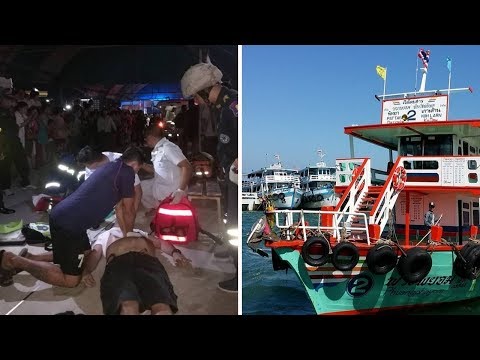 An American tourist was electrocuted and died in a freak accident after leaning against a metal pole located on the Bali Hai pier.

Andrey Bessonov, 47, had been on holiday in Pattaya when he took a boat trip to neighbouring island Koh Larn.

The group returned to a pier and Andrey sheltered under a tent on the resort’s Bali Hai Pier before leaning against a metal pole at around 7.30pm.  Upon touching the pole, which is believed to have been exposed to loose wiring, Mr. Bessonov was electrocuted in front of a large crowd of tourists.

Paramedics arrived and performed CPR in front of dozens of stunned tourists but Andrey, who is originally from Ukraine but now holds an American citizenship, was later pronounced dead in a local hospital in this tragic accident.

Witness Tanawat Khenkoon stated to the press: “The man had been on a boat and was just standing against a pole when he dropped to the floor and his body convulsed. Nobody knew what had happened or what to do. The ambulance men said the electricity leaked and touched the pole.”

”It’s sad. He was alive one minute having a holiday and now he is gone. It could have been anybody that touched the pole.”

Paramedics have closed off the section of the pier where the incident took place and cut the electricity supply to protect tourists while they investigated what caused the accident.

The Sawang Boriboon rescue group said they were checking the area to make sure it was safe before re-opening it to members of the public.

We here at The Pattaya news remind you that life can be short, live it while you can.